I love Star Wars Battlefront I and II. I should qualify that; by SWBI and SWBII I mean the original games, created by Pandemic Studios in 2004 and 2005 respectively.

They were my introduction to large-scale warfare games and the fact it was also Star Wars themed was a bonus (and so many prequel levels!). What made it even better was the splitscreen capabilities, allowing for endless co-op and counter-op matches with friends and siblings. I loved the series so much that I rebought both games for the original Xbox, as they were backwards compatible with the 360.

I didn’t play the original Battlefront when I was younger, skipping straight to Battlefront II. I had wanted to see the difference between the two games (as well as the “new” maps) so picked up a copy. As soon as I booted up the game, it instantly came back to me; that rush at the start of a map, trying to score a tactical position, aggressively pushing for the vacant capture points or maybe taking to the skies to knock out support vehicles. No other game I’ve played feels just like it.

Each level and each match has its own stories, the little differences that you talk with friends about. And after having so much fun going back to SWBI, I thought I would share three recent stories of my time playing. These stories are all from a co-op perspective with my friend, Alex, being the other player.

I hope you enjoy reading this little experiment in content. I’ve been wanting to stretch my creative writing muscles since graduating from university and this seemed like an excellent opportunity to do so. The three stories are below, just click on either name or the accompanying picture to read the story. 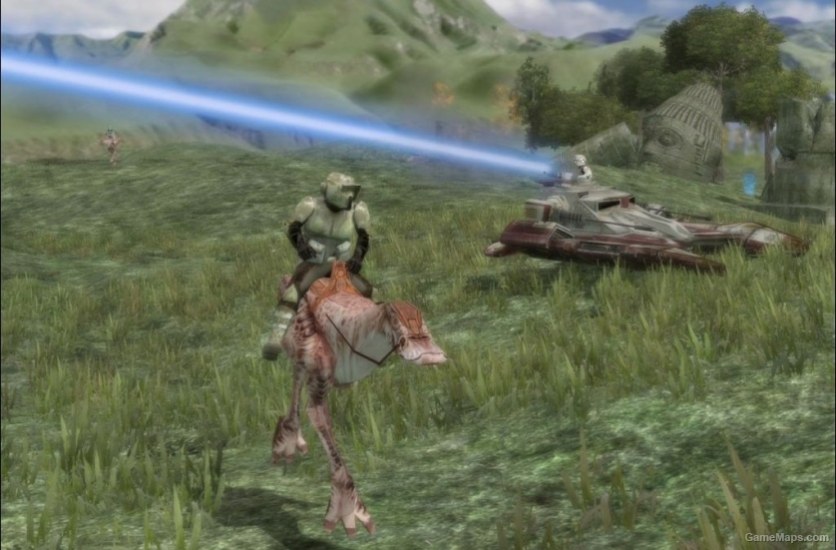 “We need to get the center command post,” I say to Alex. “The CIS charge at the start of the battle. If we wait, the AATs and Droidekas will claim the position and cut us down in droves. I say we ride in on Kaadus and get the drop on them. They are fastest mounts we have.”

A flash of blinding white light washes over my eyes and the next moment I’m on the green rolling hills of the Naboo countryside. I start to run towards the Kaadus, seizing one and hoisting myself into the saddle. I turn back to see Alex running away from the battle.

“Get moving. I’ll be there in a second.”

I turn around and whip my Kaadu. I’ve lost precious seconds figuring out why Alex is deviating from the plan. I can see the AATs already moving towards the center command post. The light Kaadu is twice as fast as the slow-moving AAT and within a few seconds I’m at the center, but the rolling Droidekas have already beaten me to the post. I leap off the Kaadu, landing behind one of the fallen structures, as a hail of gunfire flies towards me,

“Alex, where the hell are you?!!” I shout into my comm link.

“Right here,” he replies, as a Jedi Starfighter streaks overhead, laying down pinpoint fire onto the Droidekas, obliterating them in seconds. I watch him engage his thrusters for a second, flying high into the air, before spinning round and firing homing rockets into the incoming AAT, disabling it.

I whoop in celebration, watching in awe as he lays down more covering fire, destroying all incoming enemies before I can even draw a bead on them. Suddenly, an enemy rocket flies across the sky, hitting the starfighter in the back; the weakest point.

With my heart in my mouth I watch as high above, Alex ejects. He’s planned for this moment; instead of the Engineer class that can repair the fighter while piloting it, Alex has chosen a Jet Trooper. As he throws himself out of the cockpit, he engages his shoulder-mounted jet boosters, gently gliding himself down and landing with a gentle thud a few feet from me.

“Quite an entrance!” I say, as we crash forearms together in celebration. A Gungan rushes in on his own Kaadu, dismounting to help take the center command post, giving Alex a Kaadu to commandeer.

I clamber aboard my own mount that has been patiently awaiting my return and I call a general round up of all available troops to follow us. Alex and I whip our Kaadus and race off across the green pastures, as a stream of Clone troopers and mighty Gungans follow in our wake.

Ten seconds later we disembark at the final CIS command post, on an outcrop overlooking the entire battlefield. But we’ve misjudged the timing. The Kaadus have deposited us far ahead of the pack, and we are heavily outnumbered.

“Spin!” we both shout at each other, a tactic born out several hours spent playing co-op Timesplitters 2 Siberian zombie horde mode. We face opposite sides and start to spin counterclockwise, firing at the closest enemies to us.

We spin three or four times, taking down nearly every enemy with lock on to. I draw a bead on an incoming Engineer droid and fire off the last few rounds from my blaster rifle. The shots flying wide of their intended target. Damn! I had forgotten that continual fire makes the blaster rifle overheat and lose accuracy, and I’m about to pay for my mistake.

“Roll!” I shout to Alex as I switch to my sidearm and drop to prone. Alex doesn’t think about the command, rolling to the side and continuing to shoot down enemies facing him. The droid fires a cluster over my head, right where Alex had just been standing. I fire one shot into the droid’s chest plate before twitching a centimeter up and fire another shot. I miss by a hair and now am in range to be obliterated.

A blue bolt of energy flies over my prone form and hits the droid squarely between the photoreceptors, bursting the metal hunk into flames. I push myself up onto my knees and Alex grabs my arm, hoisting me onto my feet.

“That’s twice I’ve saved your skin today!” he says with a devilish smile, as the rest of the Clone/Gungan battalion finally reaches the peak of the hill. We secure the hill in a record time and the twenty-second victory counter starts to tick down.

With two seconds to go until the round ends, we throw grenades ahead of us, before rolling towards them. The explosion goes off at zero, giving us our victory poses; a squashed character model, twisted like a pretzel, a millimeter from being vaporized by fire.

The ice beneath me is cold and hard, not at all like the training simulations. I’m prone, trying to make my body as flat as possible, cradling my sniper rifle, looking out over the frozen harbour of Rhen Var.

As I perform last minute checks, my radio comm crackles into life. I shift my weight onto one side and hit the transmit button.

“Yep, just linking up with a few other fighters and we’ll be entering the caves. Whereabouts are you?”

“On the ice lake, ready to catch a few skinnies accompanying the AT-AT. Once I’m done I’ll make a dash and meet you on the other side.”

I switch off the comm link before pressing my shoulder against the butt stock of my rifle and looking through the optics. There is no movement in front of me. I hear a rumble from the heavens as heavy fog starts to develop and roll towards me. It always happens in the early morning, it gives the Empire an edge. Not to worry though.

I zoom in a bit further and immediately a silhouette pops out, darker than the surrounding vapor. I nudge the rifle a little higher to compensate for drop off before squeezing the trigger. It takes around a second for the light beam to travel across the whole ice lake and hit the grunt squarely in the temple, taking him down.

I start to swivel my rifle from side to side, picking out darkened outlines here and there, each one being brought down by at most two shots. I want to try and get as many at this range, before I am in any mortal danger. I move away from the optics to reload and out of the corner of my eye I start to see the first waves of soldiers break out of the mist and into the daylight.

Their all white uniforms make them easily identifiable against the grey background they emerge from. I pick off a few of the forward troops, before scanning for the big hitters; jet pack troopers and rocketeers.

I set my scope on a lovely Dark Trooper, but a giant metal boot obscures my line of sight. I back out of aiming to see what it is.

The AT-AT? Already? How did it sneak up this far without me realising? I’m a sitting duck if I stay here. I jump to my feet, grabbing my rifle and slinging it over my shoulder, before dashing across the harbor towards the walker. The AT-AT has a powerful set of cannons on its front side, but can’t aim straight down. If I get close enough, it won’t be able to focus its weapons on me, making it useless in terms of combat.

As I pelt across the ice and snow, I draw my pistol. Even though I’ve thinned the ranks, the majority of the Empire’s forces are charging across the bay. I serpentine towards the legs of AT-AT, rolling behind one to dodge incoming fire. I peek out and fire off a few non-committal shots, keeping any nearby soldier at arms length. I need to keep moving; staying under the AT-AT isn’t the safest option, even less with Snowtroopers surrounding me.

I roll away from the AT-AT’s back legs and sprint away. The Snowtroopers fire a few shots my way, but I am soon out of range, and they turn back towards the main battle. I make my way up a small snowy mound, switching back to my long-range rifle and do a quick scan of the horizon. There are only a few stragglers entering the party late. I quickly dispatch them, leaving the coast clear.

I throw my sniper onto my back and draw my pistol again, before setting off towards the Imperial command post. As I get close, I see the faint red glow of the capture point, reflected on the cold-grey stone walls of a bombed-out ruin that the Empire have commandeered as their forward base.

I switch from a slight jog to walking; taking pot shots at any late-coming Snowtroopers that gets close. My radio beeps again.

“We’re a bit stuck mate. They’ve got a turret on the entrance to the ice caverns; any time we try and push it cuts us in half. You got a sight on them?”

I stop, equip my rifle and look through the sight. The enemy is easy to spot; they are sat in a revolving turret atop the ruin, firing round after round at the small opening that leads to the caverns.

I kneel for support, before tapping the trigger, hitting the Snowtrooper’s exposed head and silencing the turret fire.

I rush forward, catching up with Alex as he exits the caves. We stop just before the stairs leading up to the ruin.

“Any news on the rest of the battle?” I ask. Alex gives me a grimace.

“That AT-AT is destroying all of our carriers. We need to get back pronto.”

I tap the screen on my wrist-bound computer, bringing up the map. I see the AT-AT; it is almost at the entrance to the marina, destroying every speeder that manages to spawn in.

I sigh in exasperation.

“Bloody amateurs,” Alex says. “Let’s capture this post and get back!”

I turn the map off, and check my weapons.

“Well, you’ve got the rapid-fire blaster Alex, after you!”