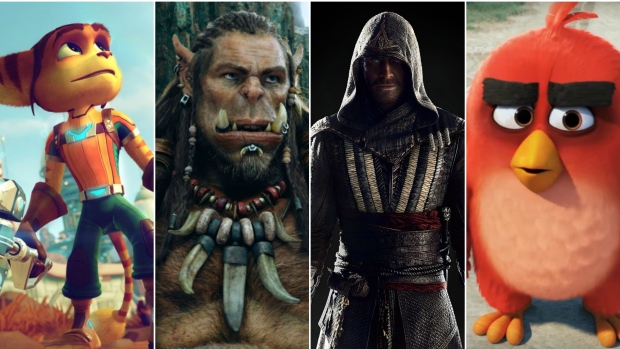 So, 16% on Rotten Tomatoes for Assassin’s Creed eh?  And after seeing it myself, I can whole heartedly agree. Seeing as we are all disappointed after Warcraft, Ratchet And Clank (remember Ratchet And Clank came out in 2016? No you didn’t, because nobody went to see it) and now Assassin’s Creed, I’ve decided to help Hollywood and the rest of cinema out. As a film fanatic and a gamer, I have been hoping for a good video game adaptation for a LONG time. And while some have come close, none of them ever become worldwide smashes. So, I have devised the four major points of how to get a video game film going in the right direction. Directors and producers, when you approach a video game film, feel free to use this as a tick list to make sure you are on course.

1.Know Your Source Material (And Whether It’s A Good Choice)

To truly understand a book you are adapting, it is widely accepted that you read it multiple times. Why are video games any different? Sure, some games range from four to forty hours, but you don’t even have to play the whole thing. Watch a Let’s Play, or if that’s still too hard, have someone in the crew play it and give you a highlight reel of moments.

You wouldn’t try and make a film adaptation of The Lord Of The Rings if you had only read the blurb and if you’re serious about adapting it, you should know the lore and story of your game. I’m not a huge fan of Halo, but I really enjoyed Halo: Legends because the creators knew the source material. They took the time to learn the lore of the galaxy and world and didn’t deviate from it, creating some exciting action anime fights.

Knowing your game also means knowing whether it is a good property to adapt. Usually this means having a game with a narrative, as you don’t have to faff about with devising a new script. Tomb Raider, good. Silent Hill, good. Warcraft, promising. Angry Birds, Fruit Ninja, Tetris, FNAF, terrible, terrible, terrible.

Now that you’ve invested time into learning about your video game, you now need to understand why that video game has fans and is widely celebrated. For example, I give you Hitman.

The appeal of Hitman is simple. A stylish man heads to exotic locales, kills usually the maximum of one person in an understated manner and then leaves without anyone knowing he was ever there. Understanding Hitman means that you know this is the gold standard for play, and that unnecessary killing, especially spectacular explosions where everyone in the surrounding area becomes aware of you is seen as the worst and wrong way to play Hitman. Yet both Hitman films have gone down the explosions and gun-battles route because it’s “easier”. To some the proper way to play Hitman may not seem cinematic enough. In response, I would offer up 2010’s The American of how to do a Hitman-esque film and it to still be entertaining.

For another example, Max Payne. The fun in Max Payne comes from the slow-motion action and the over-the-top hardboiled detective genre. The film didn’t include either of those, with terrible slow-motion effects and a dull script. They took the two things that separated Max Payne apart in the video game world and didn’t add an ounce of them into the film. A film that would be a good template is John Woo’s Hard Boiled.

And I obviously don’t need to talk about Super Mario Bros and why that failed.

I know films have a limited budget, but you can at least try and get people who are interested or have investment in the film. I’ve been critical of Warcraft, but at least Duncan Jones was passionate about his film. Another one would be Christophe Gans, the director of the first Silent Hill (which in my opinion is the best video game based film so far). Gans went out of his way to make sure it was as true to the game as possible, even recreating shots from memorable sections. Actors can also help the film, such as Angelina Jolie as Lara Croft. Jolie wanted to do the stunts for real and worked with the filmmakers to create some amazing action scenes (go back and watch Tomb Raider II before you dismiss me, some of those are great action sequences). And most of us will sit through the turgid Street Fighter for oodles of Raul Julia. Passion from the filmmakers makes things watchable.

Don’t get people who aren’t going to invest time or effort or think video games aren’t worth it. Mark Whalberg loved the original script for Max Payne but became wary after learning it was based on a game. Skip Woods looks like he hasn’t played any of the Hitman franchise before writing the scripts to BOTH Hitman films. And it seems Uwe Boll just uses the name of the games he adapts to generate interest, rather than create anything remotely connected to the games. This type of bounty-hunter approach to filmmaking needs to stop.

I’ve been hearing over and over again from many facets of both the film world and the geek world that video game movies should just stop. We got our hopes up that 2016 would be the year where video games films started achieving critical success from both fans AND critics, but we were once again left saddened at what could have been.

But we mustn’t shut video game films down. The only way to get good is to persevere. Let’s look at superheroes. Comic book/superhero films are dominating the box office nowadays, but they weren’t always a massive success, critically or commercially. Another geek touchstone, Star Wars. We had to get through two terrible Star Wars films to get back to good ones (yes, two. Phantom Menace is entertaining). Video games are a young medium. Superman was introduced nearly eighty years ago; the superhero genre has had a while to simmer before becoming the hottest property in Hollywood. Lord Of The Rings was almost a century old before that got the full cinematic approach. Games as a cultural phenomenon have had only a fraction of that time; they will have their moment any day now.

So, do you think they are any legitimately good video game films? Are you waiting for a singular property to get the silver screen treatment? Or should we all just drop them and never speak of video games and movies again?