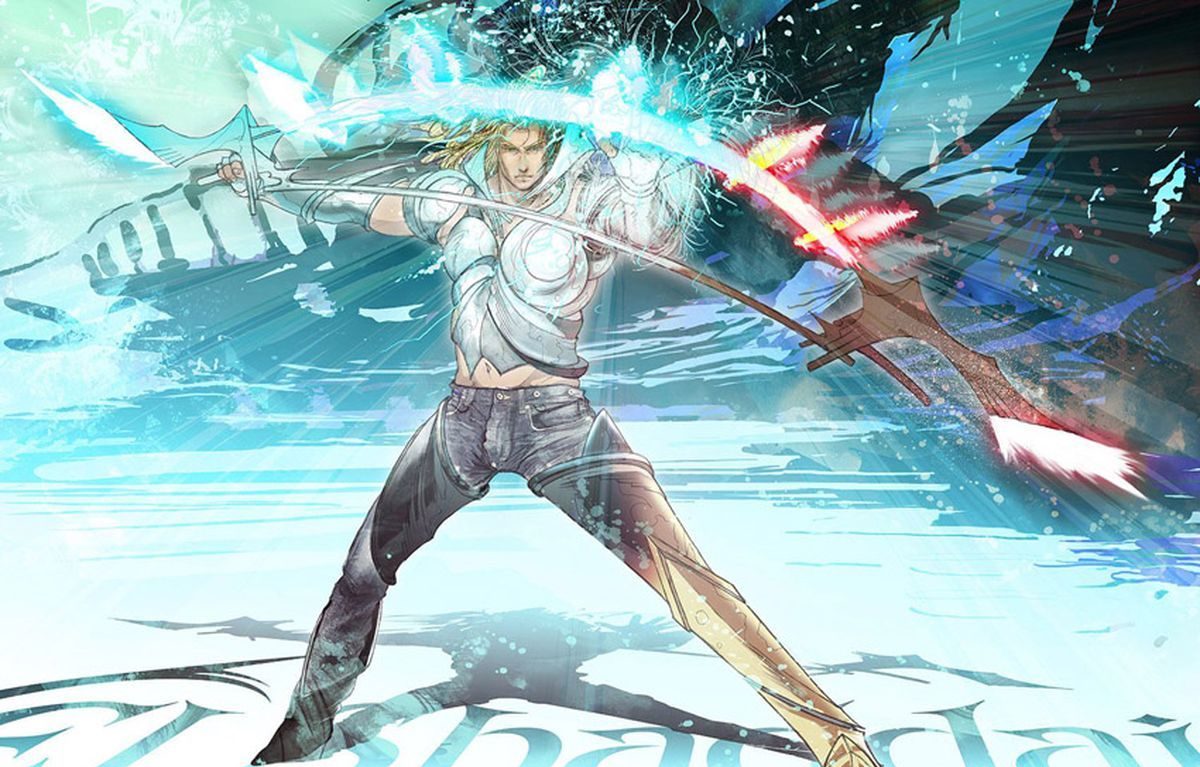 I have been on a backlog binge recently. Games that I missed the first time around, I’ve been rooting out copies and giving them a try. A lot of these games are outside of my usual genres, but have something that brought it to my attention.

IL2-Sturmovik: Birds Of Prey is a WW2 flight simulation that subtly evokes themes common in Russian literature and film. Enslaved: Odyssey To The West is a western adaptation of an 16th century Chinese text with motion-capture courtesy of Andy Serkis and was written by Alex Garland (of Ex Machina fame). And Shadows Of The Damned is a puerile and phallus-infused grindhouse romp through hell from legendary creators Suda 51, Shinji Mikami and Akira Yamaoka.

Following the running theme of games with confusingly long titles, recently I’ve been playing El Shaddai: Ascension of the Metatron. The reason I became interested in playing El Shaddai is that it is an adaptation of the Book of Enoch, an ancient Jewish text not part of biblical canon and that it was infused with anime visuals. It sounds like an fun prospect.

El Shaddai is an odd duck.

You play Enoch, a human and scribe of Heaven, sent down to Earth to capture the souls of fallen angels. If he fails then the archangels have permission to send a great flood and wipe away the world.

Aiding Enoch is the archangel Lucifel who follows along and calls God on his mobile phone to report Enoch’s progress. Oh, and he wears skinny black jeans and snaps his fingers with the frequency of a Broadway actor on opening night (he only snaps with his left hand, which is a neat touch given his name). He also rides a motorbike and constantly breaks the fourth wall.

An example of the latter is where he at one point rewinds time, but ends up going so far back that you get booted to the main menu and have to hit the start button again. Another is when he tells the PLAYER, “You can clear this in seven hours, if you are good enough,” (34:00) which is literally just under the standard play-length of the game

Enoch must make his way through the different realms to take on the fallen angels one at a time. Each realm has a different art style; the first is a cave rave with chanting hordes and psychedelic light shows. Another is filled with soft colours and fluffy clouds. Another seems to be influenced by Tron and another is a 70s glam rock concert complete with back-up dancers.

It gets even weirder when you finish some levels by being eaten whole by a Nephilim; human/angel crossbreeds that roam the land eating each other and destroying the landscape. I would call it Gilliam-esque but even Monty Python wouldn’t think up anything this brazenly ludicrous.

It is full of themes to deconstruct; the presence of religion, the nature of silent protagonists, or directionless combat. But let’s get away from those heavy topics and onto something a bit more artistic.

Today I want to talk about one of the aspects that made El Shaddai stand out from the other games I’m playing; the use of the camera.

Double Exposure – The Use Of Camera Techniques in El Shaddai

El Shaddai doesn’t give the player any control over the camera. This usually proves a detriment to player engagement, leading to annoyance at only having a certain degree of gameplay to view. But the limitations give El Shaddai a unique look, one that couldn’t be found in traditional camera controls.

El Shaddai is a mix of genres, mainly hack’n’slash and a third person platformer. Enoch runs through the realms, navigating pathways and pitfalls, as well as taking on hordes of demons, martyrs and, erm…heavily armoured giant pigs.

Most hack’n’slashers like Devil May Cry and Bayonetta have a camera that hangs back; with so many enemies on screen you need to keep track of all of them. If the camera is too close to the action then it can cause problems, with the player getting tagged by enemies they were unaware of.

El Shaddai during its hack’n’slash sections draws the camera back until the characters are incredibly small in the frame. While being in-keeping with the genre, it also lends thematic resonance. Enoch is a human, not a omni-competent world-shattering entity like the archangels are shown to be (that is when they aren’t being portrayed as talking swans, which is a good 97% of the game. Yeah, have you gathered how weird this game is yet?) The enemies and the landscape dwarf Enoch, as he fights against a world that seems too big to comprehend.

The hack’n’slash elements are structured in El Shaddai. As Enoch runs along he will come across a circular arena and the enemies will enter into combat. Nearly every encounter works like this, which is understandable. The arena gives the player a safe space to fight without having the fear of falling off the map.

In the boss battles with some the fallen angels such as Sariel, Azazel, and Armaros, they shape-shift into other forms (Sariel becomes a giant bat, Azazel becomes a Locust-like insect and Armaros transforms into some weird bug/whale/dinosaur/Sith lord hybrid, that is as simple as I can describe it).

When these forms appear, the camera shifts downwards, artificially making their scale appear larger. During boss fights, the fallen angel is the only enemy, allowing the fixed camera to not be intrusive. As soon as regular enemies appear, the camera moves higher to accommodate the player.

Once these combat sections are done, the game turns back into a platformer and changes its camera subtly. It moves more into a birds-eye view to aid jumping, especially since 3D platforming doesn’t have the precision of its 2D cousin. It is a light touch and is a smooth transition, accommodating for the dual gameplay but without large changes in gameplay or design.

A lot of the time during gameplay the player is running on a singular path, making their way through the expansive locations. The gameplay is predominately 3D, but sometimes the camera becomes stationery, morphing gameplay from 3D to 2D and back again. It creates these beautiful sequences that feel epic in their scope despite how limited they are.

Certain sections of gameplay will only be 2D, but these are usually for narrative reasons. The first section has us admiring a stained-glass window of the archangels. As the silhouette of Enoch climbs upwards, we are treated to beautiful renditions of Michael, Uriel, Raphael and Gabriel (who in this interpretation uses female pronouns, an interesting change from biblical tradition). This sequence is used to set up these characters and to inform the player that they are by your side during the adventure.

The second time the game uses this technique is after Enoch wakes from his Indecision after he journeyed into Purgatory. Once his soul is purified, Enoch awakens and goes to find Nanna, a little girl who helped guide him through a few of the realms. During his time out, she has grown up and has led a revolt against the fallen angels.

As Enoch runs along the 2D plain, the background shows a silhouette of Nanna fighting the fallen angel Ezekiel, the latter besting the former. The sequence is to illustrate how long Enoch’s journey has been and his desperation to help Nanna against the Fallen Angels.

During these cases, El Shaddai almost feels like an endless runner, focussing more on jumping pitfalls than actually changing direction or speed. It also brings you into the run at a pace, which I love. In certain games they’ll be a “run away from the bad guys/object” segment. Games like Uncharted, Tomb Raider, Crash Bandicoot, even L.A. Noire has a sequence like this.

El Shaddai has these running sequences, but the first few seconds of gameplay already have Enoch running away. It helps guide the player back into the action without losing a sense of flow.

Despite the camera moving all around the environment,  El Shaddai always highlights which way you have to go to progress the story through. The camera guides your vision, unobtrusively showing us the way without a mere hint of an objective marker. There are only a few times El Shaddai breaks this rule, but all in service of gameplay.

The first time I realised it was just before Enoch heads into Ezekiel’s realm, the second of the Fallen Angels (9:04). Enoch is heading down a corridor before it is revealed that it is opening up. There is no floor beyond the corridor, only empty space.

A faint outline can be seen outside, but nothing concrete. In essence you are taking a leap of faith. When you do take the leap, the screen blooms and a staircase is revealed where the faint outline was. Much like the walkway at the end of Indiana Jones 3, the path is only fully visible once the player makes that leap and is both stylistically and thematically fitting. The game does this a few times during important moments, where the art will slightly obscure the path to allow those moments of revelation to the player.

Many games try and create a world, but only a few capture an excellent sense of location and space in their camera movements. It is something that Japanese games work well with. Metal Gear Solid, Silent Hill, Resident Evil, Shadow Of The Colossus, 3D Mario games, they are very precise on shot placement and movement in gameplay.

That is not to say Western developers don’t also use these techniques. Gone Home’s use of first-person camera and lighting definitely created a sense of foreboding during gameplay. The original Alone In The Dark is credited with inspiring Silent Hill‘s and Resident Evil‘s camera techniques. Quantic Dream does everything in their power to create cinematic shots in their games. And Ready At Dawn mimicked lens focus and aspect ratios for their launch title The Order: 1886.

Another example may be Uncharted 3 during its chases sequences.

Looking at this sequence in Yemen, the camera moves with the action; zooming, focussing, and wiping to aid player progression.

When main character Nathan Drake and bad guy Talbot are inside, the camera zooms closer in, when they are running on the rooftops the camera heads into more of a birds-eye view to help jumping. My favourite moments are in changes of direction.

Similar to how film editors “wipe” the screen during long takes, Uncharted 3 will make these small adjustments to aid players, such as Nathan banging into walls or being hit by a door (4:23, 5:30, and 6:56).

Control is taken away for a second, the camera shifts where it needs to be (the new direction the player is moving) and then control is given back. It is a smooth transition yet it is distinct; players know that when the camera resets to a certain distance, they are back in control.

Cinematography is alive and well in games and when thought is given to how it is used, a slight camera change can make an intense action set piece more thrilling and enjoyable than it would with a bog-standard third-person view.

An example might be the Skate series. The major skating series, Tony Hawk’s Pro Skater, uses a standard camera to aid traversal and give the player a sense of spatial awareness when moving. Skate on the other hand brings the camera lower, almost touching the ground. This is to mimic home-made skating videos, and somehow makes Skate feel richer, even if the camera can sometimes obscure geography.

With games being able to perform angles and shots that are almost impossible in film, it is always interesting to see where the format will go.