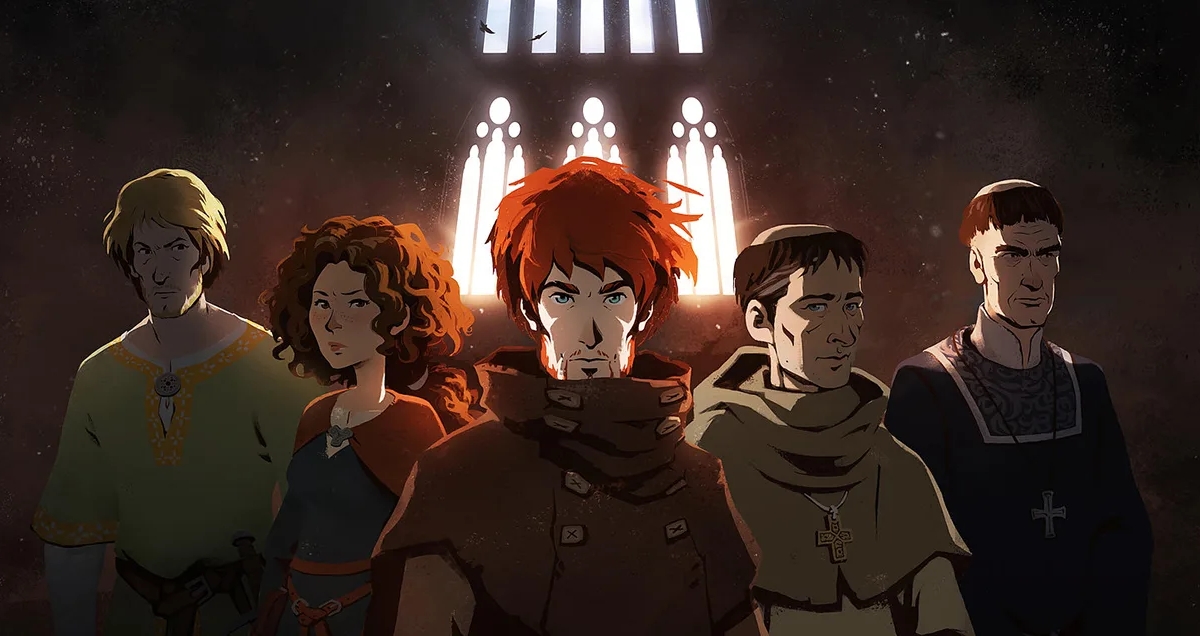 As the Playstation 5 and Xbox Series X finally cement their place as ‘current-gen’, we should take a look back at some of the games that defined the eighth generation of consoles.

We’ve seen multiplayer greats like Call of Duty and Battlefield reinvent themselves with both the old and the new (WW1 for Battlefield and CoD with Modern Warfare).

And narrative behemoths have graced our screens like Red Dead Redemption 2 as well as smaller indie hits such as Firewatch and What Remains of Edith Finch.

Today I wanted to talk about one of my favourite games from the last generation and hopefully turn a few players onto the gem that is The Pillars of the Earth.

Based on a 1000+ page historical novel by Ken Follett and set over forty years in 12th century England, The Pillars of the Earth is about three characters, Phillip, a monk, Jack, an outcast, and Aliena, a former noblewoman.

The story sees the three cross paths as they try to grow their town of Kingsbridge, fend off rival noble families and vengeful bishops, and build a cathedral the likes the world has never seen before.

It’s not the first book to be translated to gaming. The most famous examples are the aforementioned The Witcher and the excellent Metro series.

But in comparison to those two franchises, The Pillars of the Earth doesn’t sound like it would be a blood-pumping adventure full of swords and shields. It’s a historical novel, not fantasy, so there are no mages or sorcerers to liven up the mostly downbeat and dark mood.

But it’s the moments where the characters cross paths, the battle of wits and scriptures, and the twists and turns as the lead characters sow the wind and reap the whirlwind that make The Pillars of the Earth one of the best narrative games of its generation, and why I want to talk about today.

The Pillars of the Earth is one of those games where everything perfectly comes together to build something remarkable. The artwork, the music, the 40+ hours of performance, and the story, each one is a singular piece that makes the whole that much more enjoyable.

The game is a point-and-click adventure that uses a large canvas as the background, scrolling left and right when the player character moves. The scaling is incredible, with entire cathedrals, estates, and even towns explorable, but still retaining exquisite details.

Due to the ‘static’ backgrounds, the game camera works almost like a film camera, highlighting points it wants to draw attention to but without taking control away from the player. This allows the player to feel like they are naturally discovering each location and the secrets they hold.

One repeated location, the crypt at the bottom of the cathedral, is one of my favourite spots in the entire game just from its atmosphere. The use of light and darkness in this one small room is played with so well that it can evoke fear or fascination, just with a simple change of lighting.

Part of the excellent atmosphere comes from the music by Tilo Alpermann. Since the game is primarily about religion, the majority of the music is ecclesiastical, mixing male choirs with strings and woodwind instruments with heavy brass approaching in Book 2 and 3. However, it’s in the less traditional aspects where the music shines.

Tracks like ‘Hell’, which incorporates faint chimes and cymbals into its rolling strings, or ‘Bishop Waleran’s Wrath’ which uses an electric guitar for its main beat and what sounds like reversed strings or brass on the second beat give this strange sense of foreboding, of power beyond the characters we control.

While I love the graphics and the soundtrack, the story is the high-point of the game for me, and anyone wanting to experience a deeply engaging and philosophical narrative from the last generation should seek it out.

Set over three ‘books’, each with seven chapters, the story is expansive and slow-build, moving at an almost glacial pace at the start to set the major conflicts, but also the tone of those chapters.

Even the main menu helps establish the feeling of each book. Book One is dark and cold, with many thinking the Devil walks amongst them. Book Two is lighter, showing the characters and their town starting the rebuild. Book Three is shrouded in dust and debris as chaos reigns down once again. It’s a masterclass in simple yet effective narrative design.

The game switches perspectives throughout, from Phillip, to Jack, then to Aliena, and back again, each character adding a tiny piece of the narrative puzzle until it all comes together for the final couple of chapters of each book.

You could in fact play each book as a standalone story as they build, climax, and resolve like a standard plot structure, but the fun is watching characters in Chapter Twenty-one reference decisions you made in Chapter Four.

At the end of every chapter you get a itemised list of what you did, what actions you took and who you spoke with. A lot of nouveau point-and-clicks like Detroit: Become Human, Life Is Strange, and Telltale’s The Walking Dead have these similar lists.

With The Pillars of the Earth there isn’t always the reference to something that didn’t happen like other games, it’s solely on what did happen, which I feel make it seem more personal, rather than a somewhat A/B approach to narrative.

The main gameplay loop is through dialogue, with your words and tone carving a pathway through the story. While it does have set story beats throughout, there are small paths of deviation that lead to gigantic turns later on, sometimes even in a different ‘book’, so far removed that you might have even forgot what your previous actions were.

While the story is mainly character-based, a major point that dragged me into wanting to see the next chapter are the themes the narrative plays with. Ideas like religion and devotion, sin and violence, even love and sex are explored deeply in The Pillars of the Earth.

Each book features powerful moments that make the story come alive with meaning and emotion. Scenes where characters find or lose their faith while others see the Divine and the Devil amongst them are seared into my mind due to the way they shake the very foundations of the cast, and how there hasn’t been many games that tried to do something similar.

The game also spans the entire development of a romantic relationship, from shy smiles and holding hands to spending passionate nights together (this game actually has my favourite sex scene in all of gaming), and eventually settling down and starting a family, something that up until recently games haven’t tried to depict with any meaningful, long-term effects.

It’s a mature story, not with depictions of violence and nudity but with its ideas and implications, and that’s why I absolutely loved every moment.

I hope that this short post has teased your appetite to experience this incredible game. The Pillars of the Earth was an absolute delight and I can’t wait to dive back in again to one of the best games of the last generation.