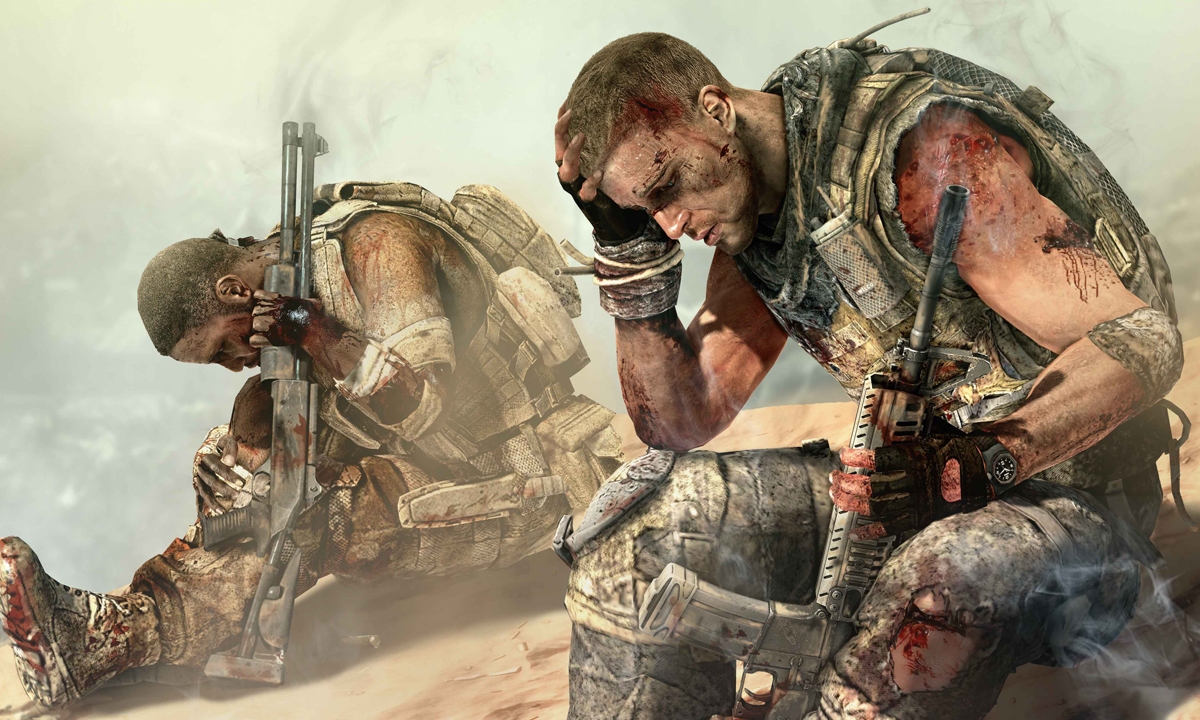 WARNING: THE FOLLOWING DISCUSSION CONTAINS SPOLIERS FOR Spec Ops: The Line. READ ON TO YOUR OWN DISCRETION.

Despite being four and half years old at this point people still talk about Spec Ops: The Line. It is one of those games like Bioshock or even Call Of Duty 4: Modern Warfare that really stuck with people long after they put down the controller. And even though it was widely praised by both critics and consumers alike and eventually turning into a cult classic it sadly failed to meet estimated sales.

Many people have already talked about how no one really has fun playing through Spec Ops: The Line. I can attest that during the final segments it was one of the worst feelings while playing a game. Most think pieces focus on Spec Ops‘ most infamous and controversial scene, “the white phosphorous scene”, and I wanted to do something similar. Not so much a recount of my playthrough, but why that one scene works from a more theoretical standpoint (and I’ve already bored you all to tears haven’t I?) Well, let’s start.

LAST CHANCE TO TURN AROUND…

The scene including the white phosphorus (titled “The Gate”) starts thus. The main character Captain Walker and his two subordinates Lugo and Adams are making their way through a half-destroyed Dubai and come across a large collection of enemy soldiers. There are too many to fight through, so Walker and Adams decide to use white phosphorous mortars to clear a path. Lugo is appalled that the other two would use a outlawed weapon on enemy troops, but he is eventually brought in to help out.

The three-man crew set off a camera to show where the enemy soldiers are and start launching mortars. After a few minutes all known hostiles are down. Then the game plays its hand by making you walk through the destruction you caused. Walker passes charred and burning bodies until you get to where the last mortar exploded. While on the small screen that Captain Walker was using it looked like a large group of white dots indistinguishable from the enemies shooting at you, it turns out they were civilians hiding from the shelling. Civilians that Captain Walker and his compatriots had been sent to Dubai to save. You as Captain Walker have committed a war crime.

Most people think this is why the scene is great and yes that is true. Having a player walk through the destruction they caused is an amazing plot device to show themes that the creators Yager wanted to explore.

But Spec Ops: The Line isn’t the only game to have civilians and innocents murdered in-game. Every moral guardians favourite punching bag Grand Theft Auto is almost synonymous with civilian massacres. Call Of Duty: Modern Warfare 2 has a level where you play the part of an undercover terrorist who commits an attack in an airport (starts at 1:39). And the Call Of Duty instalment before that, World At War, had players commiting atrocities against surrendering soldiers (starts at 8:09). So let’s dig into the theory side of why Spec Ops: The Line works.

“The Gulf War Did Not Take Place”

The above title was the collective name of three pieces by Jean Baudrillard written between January and February 1991 and fully published in 1995. The idea behind the theory was that the Gulf War could have been fabricated was due to the usage of computer-guided missiles, real-time satellites, and mapping, as well as infrared imaging to designate targets. Instead of a conventional one-on-one engagement between Iraqi and Coalition forces the decisions were made on computer screens or thousands of miles away from the frontlines. Therefore Baudrillard said that it was possible that the war never took place because the large percentage of the war was simulated. When writing a summary of the essay, Christine Etherington-Wright and Ruth Doughty said that the war fought was, “…in a comparable manner to the way we play interactive games on our PCs and other gaming platforms; it was simulated.” (2011, p.125) And this is where we bring it back to video games.

Examples: Call Of Duty vs. Spec Ops: The Line

All video games are simulated. Even with the advent of motion controls or virtual reality goggles which have blurred the line a bit more between simulation and a real-life performance each video game has a screen involved. But let us go further with the idea of screens with Spec Ops: The Line‘s “The Gate” on one side and Call Of Duty : Modern Warfare 2‘s “Wolverines!” level on the other.

Both levels involve screens with “Wolverines!”, the player takes control of a missile drone and during the white phosphorous part of “The Gate” the player takes command of a camera/computer screen. Tying in with Baudrillard’s theory on the Gulf War there is a disconnect between the enemy soldiers being killed on the tiny screen and seeing the repercussions of confirmed kills.

This idea of simulation is furthered in Modern Warfare 2, as bodies disappear after dying, leaving only a small blood of blood and their gun behind. While this maybe a performance issue it still adds to what Baudrillard calls, “…the structural unreality of images.” (1995, p.46-47)

What Spec Ops: The Line does is walk you through the destruction you wreaked. Making the player march through where the mortars landed breaks that feeling of simulation and face the reality that Lugo warned Walker about before using the mortars. This is pushed even more by the final use of the screen in this scene.

We can see Walker’s face slightly reflected throughout the scene but after firing the last mortar it becomes a lot more visible. This is the “black mirror”, reflecting the player’s use of white phosphorous as a reflection on themselves. Baudrillard calls the American way of life as, “…nothing personal! The make war in the same manner: pragmatically and not symbolically.” (1995, p.39). That’s why the reflection is important because it adds the personal to the scene.

Baudrillard continued by saying that the media helped create a narrative of the Gulf War that was not representative instead making the war seem more like a, “mainstream blockbuster” through a, “sensationalist style of reporting” (2011, p.125). This is another theme that separates Spec Ops: The Line from Modern Warfare 2.

Spec Ops: The Line‘s level structure and the placement of the white phosphorous section has gameplay on either side of it and the chapter starts right after the end of the last one with hardly a break in the middle. Contrast this with Modern Warfare 2‘s level structure which are very controlled with distinct beginning, middle, and ends, feeling more like the sensationalism that Baudrillard mentioned. Add to this Modern Warfare 2‘s “reuse” of film sets and quotes (“Wolverines!” is taken from Red Dawn, and “The Only Easy Day…Was Yesterday” and “The Gulag” are ripped straight from The Rock), it adds a distinct “Hollywood narrative” to the storyline. And while Spec Ops: The Line is known as a loose adaptation of Apocalypse Now (adapted from Heart Of Darkness) it wasn’t as overt as Modern Warfare 2.

The lack of a polished “‘MURICA!” style story in Spec Ops: The Line makes people remember it and that is why its story is credited as one of the best in recent years.

The Gulf War Did Not Take Place by Jean Baudrillard. (1995) Reprint. Published in USA by Indiana University Press.

4 thoughts on “A Postmodernist Reading Of Spec Ops: The Line’s White Phosphorous Scene”